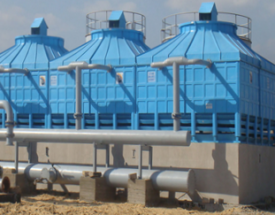 Is Your Cooling Tower as Safe as You Think? Is Stricter Oversight the Answer?

Legionella bacteria, the source of Legionnaire’s Disease, has been repeatedly found in inspections of cooling towers after outbreaks. Many areas are turning to tighter rules and more vigorous inspections of cooling towers as a way to prevent outbreaks.
Public officials and building owners are being held to answer for the outbreaks, with various systems being looked at to help provide answers.

According to an AP report on March 13th, an ex-Flint Michigan Official was given probation for neglecting to report a Legionnaire’s outbreak that occurred during the much publicized water scandal there last year.

Some areas have stepped up inspections, while others have added fines and new rules. Some areas have also stepped up educational resources and outreach to help those who manage facilities become more acutely aware of the needed precautions and maintenance procedures needed.

Operating procedures, maintenance, and cleaning are critical in preventing growth of the bacteria that cause Legionnaire’s disease. Due to changes in technology over time, many older buildings can also benefit from newer systems.

Educational outreach directly to owner of buildings is a benefit of cooling tower registration systems being tried in some jurisdictions. Such information can be critical in supporting owners, who are ultimately responsible for the maintenance their buildings.

The Centers for Disease Control and Prevention reports that “…about 5,000 cases of Legionnaires’ disease are now reported each year in the United States.” Luckily there is some good news on the recovery side. Legionnaires’ disease is most often non-fatal today, thanks to better detection and treatment of the disease.

In an article at the Charleston Gazette-Mail, Janet Briscoe at Kanawha-Charleston Health Department stated “People are getting treated sooner. It’s identified sooner, so the rates of death are a lot less than what they were in the past.”

Newer technology, better education and closer oversight of cooling towers are all coming together to prevent illnesses due to Legionnaire’s Disease.